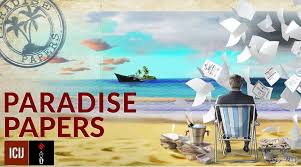 The leaks in the Snowden revelations, Panama and Paradise papers shows clearly a global corruption network. This gives rise to global poverty and inequality while the privileged few particularly the elite loot and hide their assets.

From the leaks, it becomes clear, keeping legal loopholes for these tax havens is not only unethical but offers only an economic benefit to those hiding their money away from regulators and tax authorities. These acts although may not necessarily be illegal but has lots of moral burdens especially for legitimate elites but is reprehensible for tax dodgers, criminal elements, rent seekers and kleptomaniacs. Therefore, transparency and accountability stakeholders and advocates would need to start a long journey to surmount this glaring tumor of tax heavens.

Illicit financial flows and leakages on taxes havens have exposed the secrets of the elites and also the level of intrigues in the global financial outlays. Since the WikiLeaks, there has been growing leaks that have shown the outer outlays of our modern financial architecture.  The Offshore Leaks Database includes information from close to 500,000 additional offshore entities scattered all over the world.

In addition to the Paradise Papers, the database also includes information on more than 100,000 entities that come from Offshore Leaks, more than 210,000 entities from Panama Papers and more than 175,000 from Bahamas Leaks and more than 120 politicians and country leaders, in nearly 50 countries as well as hundreds of business people across the world were identified in the record as users of offshore entities. These also expose the tax engineering of more than 100 multinational corporations, including Apple, Nike, and Botox-maker Allergan.

In Africa, the Paradise Papers point at six powerful politicians and businesspersons in Angola, Democratic Republic of Congo, Kenya, Nigeria, Zambia, and Uganda. In the extractives, the most important revelations show the light on secretive deals and hidden companies connected to Glencore, the world’s largest commodity trader, and provides detailed accounts of the company’s negotiations in the Democratic Republic of Congo for valuable mineral resources.

For Nigeria, Mr. Emefiele, the Nigeria’s  Central Bank Governor and Jim Ovia, the former Zenith Bank Chairman,  between 2007 and 2012, incorporated three offshore entities in tax havens, which were used to acquire luxury jets and move funds around in cyclical manners that suggested tax avoidance.

Tax experts and journalists believe, the leasing schemes adopted for these transactions were structured to avoid tax – £10,892,166 in total. Tenia Company Limited registered BY Saka Tinubu with operation in the Cayman Islands in April 2001 linked to Mr. Bukola Saraki, the Nigeria’s Senate President was mentioned in Panama papers

Revelations from the leaks have led to pragmatic actions by some states in the west to punish those exposed, while Nigeria and other Africa countries are yet to punish their citizens mentioned in all the leaks. In view of that, we need to galvanize forces to end or reduce the practice of tax havens particularly in British and the US territories which are most conducive for the culprits. We urge and expect these countries to take the lead in addressing the tax heavens practices. And when this happens, it will reduce the huge amount of monies taken offshore from both the advanced economies and Africa’s struggling economies.

Besides poverty and inequality which tax havens have fuelled over time, the operations of Tax of havens has a great huge moral and financial burden which must be stopped immediately.