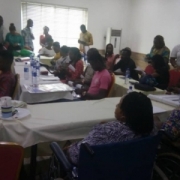 Enugu based NGO Trains Artisans on Impact of Oil and Gas in their Businesse...